I have set out to share a few secrets from my life-long professional and academic experience of pricing science, which I practice every day at Evo Pricing, the AI system to create value from automated decisions. Please note that everything described in this article falls within the current regulatory context for acceptable practice.

We experience pricing when buying a single product or service, every day; however the professional practitioner thinks of pricing differently: aggregating across different products, benchmarking different vendors over time, and appropriately accounting for discounting: a multi-dimensional challenge, wherein lies significant profit opportunity as we shall see.

Pricing adjustments can impact one or more of the 4 dimensions which, together, account for the overall average pricing:

These are the ‘four levers’ that can be pulled to change the average pricing, and this is the first part of the framework.

Through the ‘nine components’ part of the framework (further below), every single lever to change prices can be designed, monitored and effectively allocated to its relevant effects within a simple yet complete structure.

‘Pricing 4 & 9’ framework: 4 dimensions that can be used as levers to change the average pricing, & 9 monitoring boxes.

Every company shares the same four strategic levers, nine components — but some are more skilled than others in their ability to automate effective decisions, as we will see in the examples.

According to market data collected by Evo Pricing via web scraping:

The price of an average bottle of wine in the UK went up by ~20% during the 2 months of coronavirus lockdown.

No newspaper talked about it, likely because this was not actually a ‘price change’ in the traditional sense:

Waterfall charts are hard to compile correctly, but easy to absorb as a quick overview “at a glance”. However, the correct interpretation of this waterfall requires additional definitions: what was the underlying data structure that led to such insight?

At a very basic level, what the customer actually pays (with cash or credit) is driven by list price minus any discount, like in the following diagram where Paid Price = List Price — Discount:

This example chart shows real data, the average price of a bottle of wine in the UK around the ‘coronavirus’ period: specifically between March 1st and May 1st 2020. Market pricing was monitored by Evo Pricing using web-scraped Internet data on ~100,000 products.

The data source is not volume weighted: more bottles are sold at the cheaper end of the range than at the expensive end, so data are skewed towards a more expensive average than the actual weighted average would be. For how the trend changes over time, rather than the actual absolute value at any given time, this is OK.

Several approaches could be used to adjust for this skew, so to get a more realistic average value (in the £10–15 range), but typically requiring proprietary data and methods: beyond the scope of this already long piece.

The full data shows the 9 components:

[technical note: pp are ‘percentage points’, i.e. changes between two % values; the numbers in the central oval show the % or pp change in the trendline value during the period — in the cases of boxes 3 & 9, this change is in turn compared with the initial value of the list & paid price respectively]

Each of the columns cumulates to the top box, i.e. the ‘box arithmetics’ work as follows:

Then looking at the nine boxes above overall, these are all the elements needed to build the waterfall chart. The most significant component of the 19% growth in paid price for a bottle of wine was ‘mix change’, while all other boxes had a far lower rate of change.

What to do with this knowledge?

Framework called ‘4 & 9 strategies’ with reference to ‘Outcome & Input’, i.e. How to change prices [Outcome] & How to look at the underlying data [Input].

We saw the input (data), now the exciting outcome (value) .‘Pricing 4 & 9’: 4 ways to change prices as an outcome, 9 boxes of the comprehensive input framework.

We can proceed to drive value creation with Smart Pricing by using the 4 strategies outlined initially:

Relatively straightforward: what everyone thinks of when ‘changing prices’. Therefore fast forward this section, directly on to examples of the other strategies, which are much less straightforward. 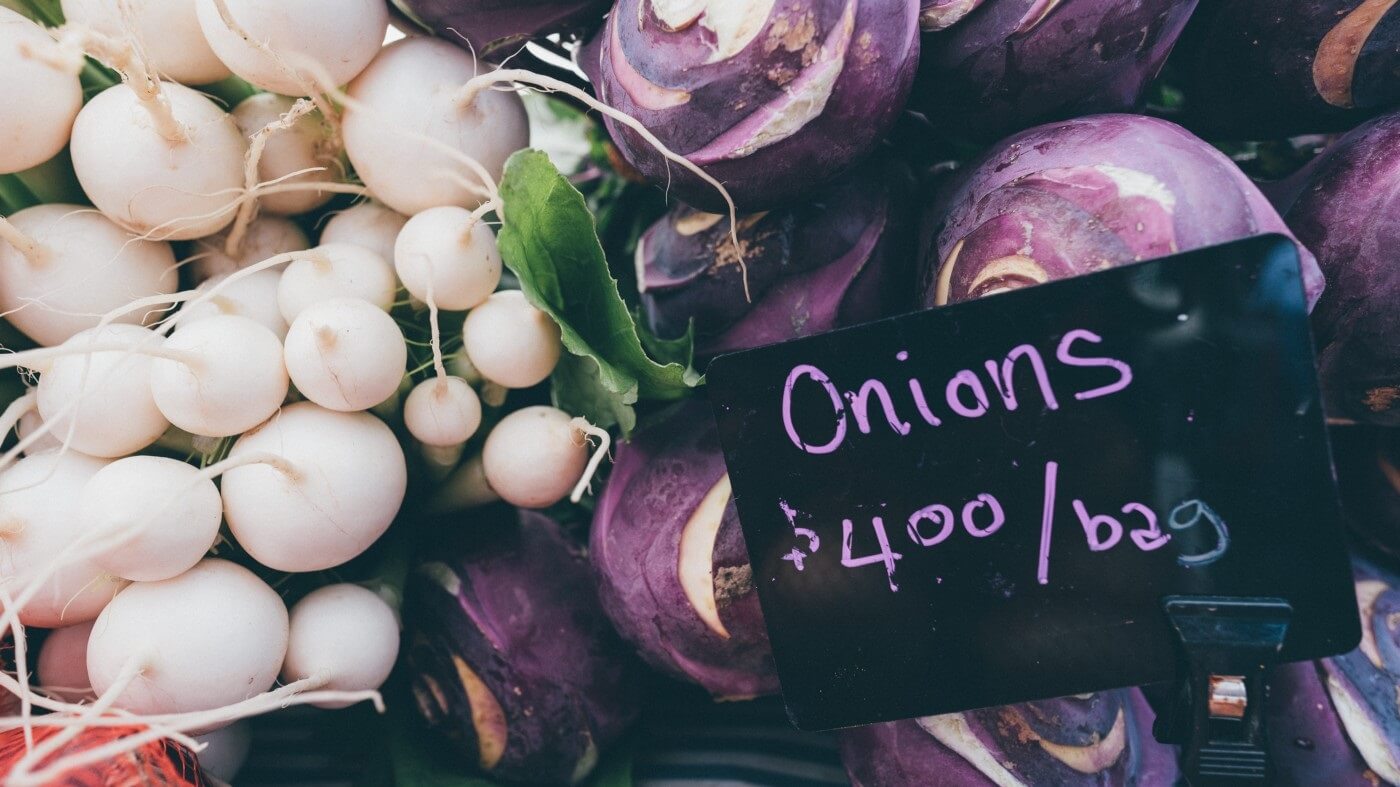 How prices can be changed by targeting box 3- List Price mix change.

What happened in March/April in the UK was rather extraordinary in magnitude, but not unusual.

List price can be changed indirectly, through the basket mix: by changing the range of products available, the average price can be moved higher or lower without ever touching a single price point.

For example, as shown in the chart below (still the same UK wines data set), Marks & Spencer — one of the leading UK high-street grocers — nearly ran out of wine during coronavirus, and specifically ran out of cheap wine bottles, so its average price for a bottle of wine automatically went up as only its more expensive wines were left in stock.

This was likely not a strategic decision, but rather an outcome due to supply chain issues; these had been well documented in the UK media in 2019 and 2020 already, even if until now mostly with a focus on their fashion range, rather than grocery.

A data-driven count of the range of Marks & Spencer wines recently offered online in the UK:

Other providers may also have purposefully changed their offering from a diverse selection of wines to only luxury, expensive wines, without having changed the price of any single product.

While increasing prices directly would have risked criticism and easily been unpopular, at a time of crisis, changing the product range is typically considered more ‘fair’, as is also the case with promotions — see the next two strategies.

Prices can also be changed by targeting box 5- % items discounted.

The average discount can be influenced even without changing the % discount, by changing the number of products offered with the same deal.

An historically interesting example is relative to the time of the Brexit referendum in the UK, again based on Evo Pricing research: in 2016 the cost of importing wines went up, as the exchange rate of the GBP to the EUR took an almost overnight beating.

The UK wine market reaction, back then: 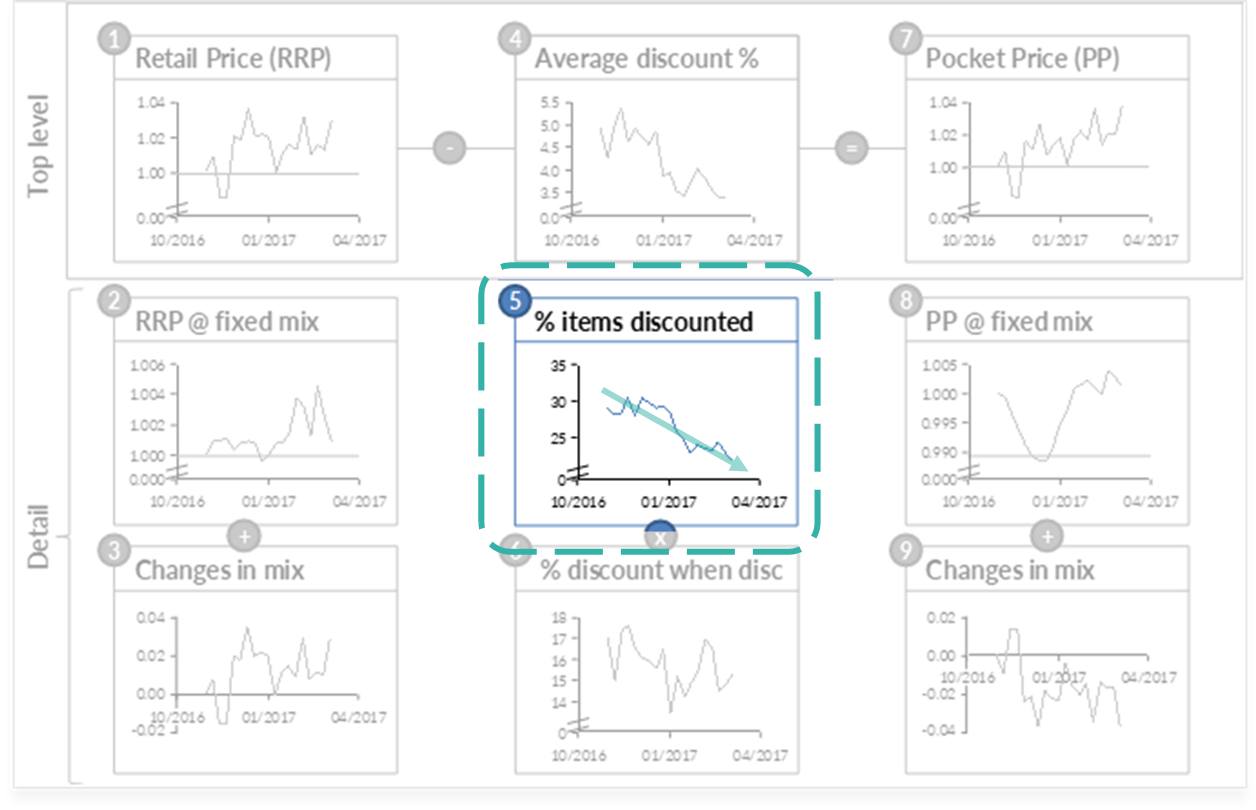 This older look&feel of the same Evo Pricing template first introduced above shows that box 5 is, in this case, the most striking one.

According to Evo Pricing data, retailers did not change their list pricing, but rather their promotions first e.g. their Retail Recommended Price (RRP) @ fixed mix remained very much stable at least until the end of the period charted above (but it did change afterwards); nor did they change their discounting strategy e.g. their ‘% discount when on offer’: anyone who was ‘everyday low price’ or ‘always on promotion’ or ‘high-low’ remained so.

But the % of items on promotion did change nearly overnight, significantly, by 10 percentage points out of ~30%, which is by a third: a lot harder to find good wine on special offers, even while the discount of each offer remained the same!

Curiously, by comparing the ‘old 2016’ to the ‘new 2020’ charts, we see how the % items discounted decrease that occurred in 2016 remained still relatively flat, around the 20% mark, up until today. Fewer promoted wines were a by-product of Brexit, apparently.

According to Evo Pricing research, this same strategy has also been used extensively throughout other grocery categories, during the coronavirus crisis — but still none of the UK newspapers noticed it.

Prices can also be changed by targeting box 6- % off when discounted.

Price perception is driven by anchoring: the relative reference to another number, for example the price of a similar item, a crossed out discounted price, or even an otherwise irrelevant number. 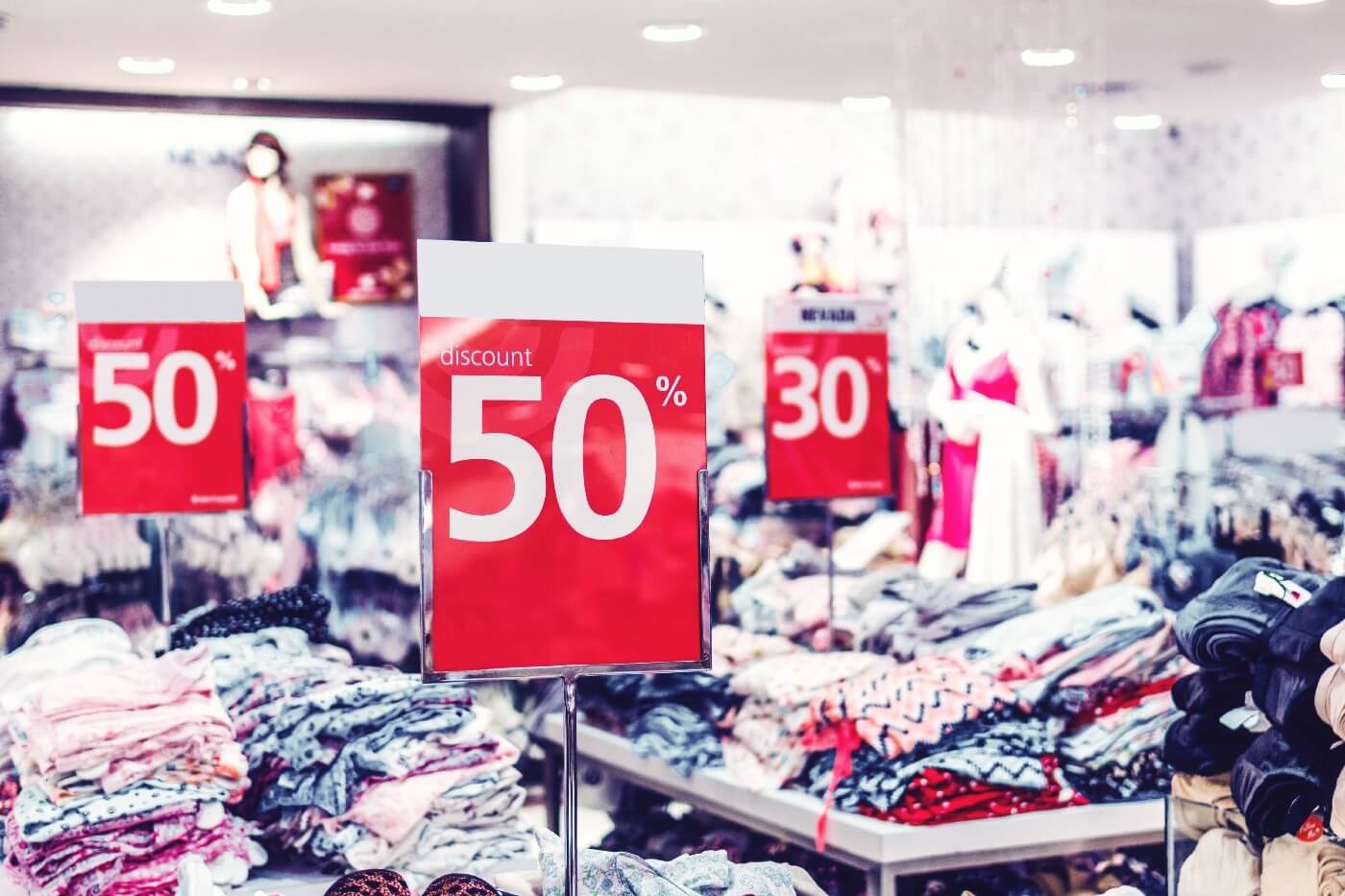 Anchoring has been very well documented in scientific literature, like for example in Anchoring (cognitive bias) and the classic 1974 experiment of Tversky and Kahneman which demonstrated how price perception can even be influenced by using entirely random and unrelated numbers.

Scientists designed a fascinating experiment: asking US students to think of the last two digits of their ‘Social Security’ number before bidding for an everyday item like a tea cup. They measured how these two numbers were correlated with each other on average, without any logical reason whatsoever. Later confirmed to work everywhere else in the world, with such striking scientific results replicated across any product category.

More relevant to management practice, and depending on the desired effect, pricing perception can be influenced by placing an iconic expensive item next to cheaper items (for example in a retail store), by ‘versioning’ a product with a slightly different name to make it harder to compare (for example in e-commerce) or by introducing a sometimes artificially manufactured ‘list price’ next to the actual ‘asked price’. Lawful so long as appropriately disclosed.

Today, for a room in Las Vegas (Nevada) on a popular travel website this was literally the first result listed:

Taking the time to search online and being rewarded with a pretty good deal: a $95 price for a $130 room (for two nights of leisure, not just one!). But what is the $130 price?

Double-click the little ‘i’, and get this prominent disclosure — in rather large print: 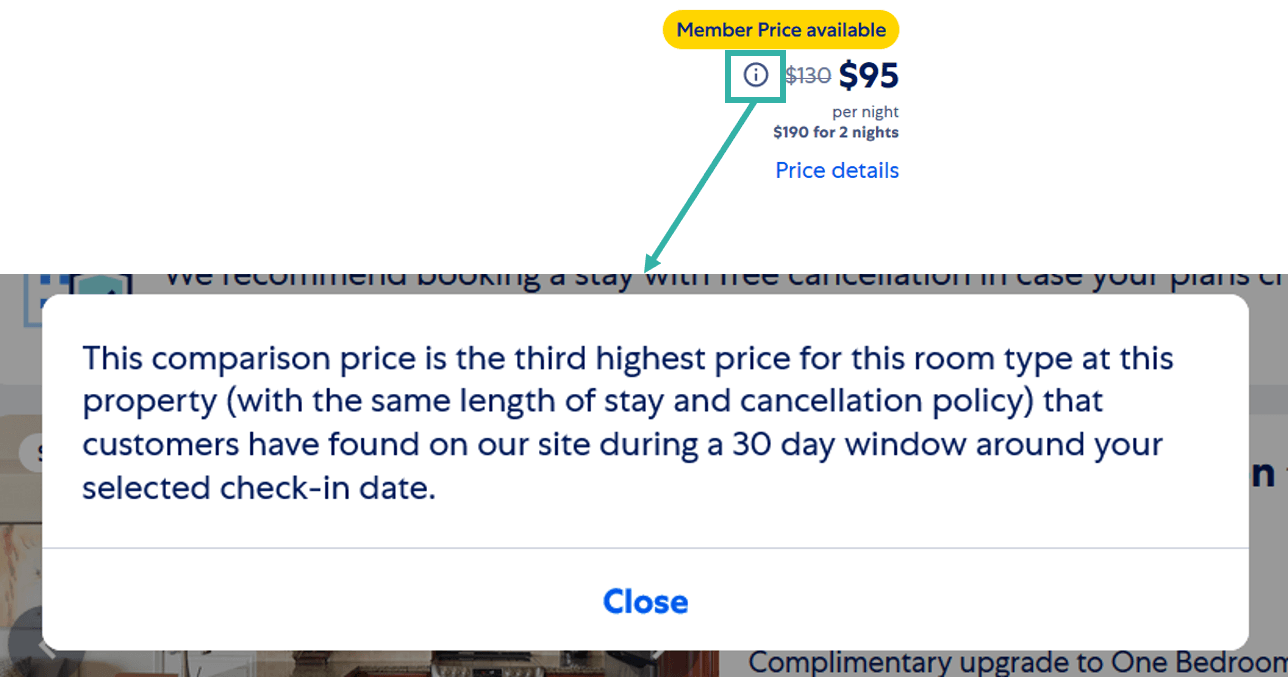 Even many years after my PhD in pricing, this sentence remains still somewhat puzzling: 4-line of text without a single comma or punctuation, other than two parentheses!

By and large, the “anchor” price is for a slightly different product: travelling on different dates. No guarantee that the $95 is actually cheap when compared to other websites for the same date — as the “anchor” is to an internal reference.

Note: explicitly called a comparison price, which is what it is.

Welcome to the magic world of pricing!

Surprising, maybe? To help navigate this complexity, today I shared the comprehensive framework for scientific pricing: 4 levers to change prices & 9 boxes to monitor any market. A guide to reveal a bit more of this impactful & fascinating science.

To learn more about pricing: https://resources.evopricing.com/intelligence/why-is-pricing-under-loved-and-over-leveraged/

For any further questions, please do not hesitate to leave a comment. Happy pricing!

PS yes, these strategies work even on an aware researcher like me 🙂